When:  Friday, 10-ish
What did I drink? One Sixpoint Sweet Action, one Green Flash West Coast IPA, one Four Roses on the rocks, one pint I don’t recall 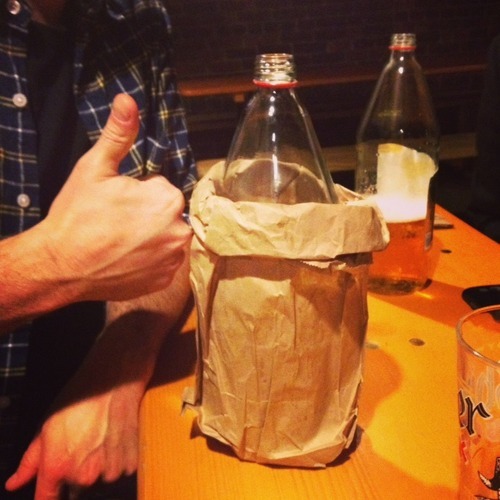 Never has such little time passed between statement of intent and execution. Left to my own devices, months, maybe years, could pass before doing what I say I will. An acquaintance’s desire to turn 40 while drinking 40s was the subject a fortuitous Facebook invite.  The online outrage over $10 bottles of oversized Miller in brown paper bags in Bed-Stuy had resulted in a two-dollar price reduction. Not unreasonable. Nonetheless, no one else at Beast of Bourbon was drinking them.

Age appropriate? Theoretically. During one periodic check, 7/8 of our back patio picnic table was 40+. Minus the bald man in a polo,  who was likely similarly aged but differently styled, the oldest people having the dirtiest time was our rotating group.
Was I carded? Yes, but only because there was a bouncer doing his job at a new enormous bar with more space than people.