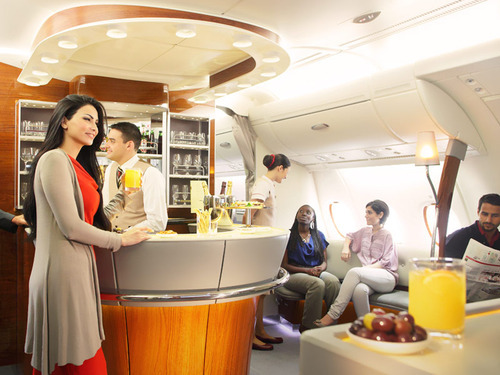 I came close to heaven once. In fact, it was around this time last year when I was inexplicably upgraded to business class on Emirates, on an Airbus A380, the double-decker with a real standalone bar (flat beds, showers, whatever) an amenity that seared itself into my brain the first time I saw the ad filled with multi-culti jetsetters. Alas, close doesn’t cut it. Being a flight between Dubai and Hong Kong, apparently not long-haul enough, the bar stood empty, unmanned, no sky party for the attractive and ethnically ambiguous. 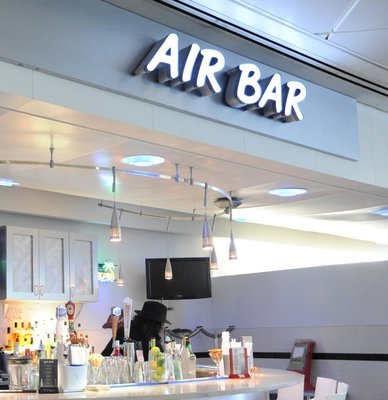 The closest I’ve come since is the Air Bar in the Sutphin Blvd. AirTrain station/transit hub. There are a lot of wheeled carry-ons propped at tables, there are JFK workers drinking beer and shots while flirting with the bartender in Spanish as she periodically sings Shakira songs along with her iPod, and there are people like me who journeyed to the ends of Queens just for something different to do post-Independence Day, a staycation, if you will.

Tim Hortons occupies the adjoining space, so you can snack on Timbits while nursing a happy hour (5pm-8pm) Killian’s (which was sold out) or Coors (which no one wanted) and watching The Manhattan Project (teenage Cynthia Nixon) on the TV behind the bar.

Age appropriate? Sure, there was a cuspy woman sitting at the bar and another, clearly over 60, sitting nearby with a homemade sandwich and a bottle of V8.
Was I carded? No, but a young man who appeared to be barely out of his teens was, and then proceeded to hit on my 41-year-old friend.